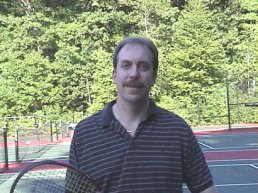 Lance Andersen has been teaching tennis since 2002. He is currently on staff at the Longfellow Club in Wayland, The Tennis Academy at Harvard. Lance has also previously taught at SportsWorld Center (formally NorthMeadow) in Tewksbury and the Marcus Lewis Tennis Center in Acton.

Lance is a PTR Tester and Clinician, a TIA Global Cardio Tennis-Master Traine,r and USPTA certified. He is also a member of Team Babolat. He is a frequent speaker at PTR, USPTA, TIA and USTA events.

Lance is the Chair for the PTR Technology Committee and is a member of the TIA Technology Panel.

When he is not teaching tennis, Lance is a Principle Member of the Technical Staff for Oracle Corporation, . focusing on Java EE and Database Technologies. He is also the JDBC specification lead.

Other Areas of Interest

Join the PTR for its 2005 International Symposium full story...